Brief description of TPU and its film

TPU is one of the fastest-growing new elastomer materials. In addition to its excellent characteristics such as environmental protection, high strength, high elongation, tear resistance, water resistance, oil resistance, wear resistance, etc., it can be processed using traditional processes such as injection molding, extrusion, casting, film blowing, etc., which further accelerates the development of TPU.

According to the type of material, TPU film can be divided into ordinary polyester type, waterproof and moisture-permeable polyether type, hydrolysis resistant polyether type, polycarbonate type, polycaprolactone type, polyolefin type, etc. In addition, each type of film also has matte, transparent, dyed, frosted, and other varieties.

Waterproof and breathable products are one of the fastest-growing varieties in the market in recent two years, commonly used 0.01mm, 0.012mm, 0.015mm these specifications, accounting for about 10%-15% of the market share of TPU film, with the development of the TPU market, and the gradual decline of prices, market share will have a large room for growth. 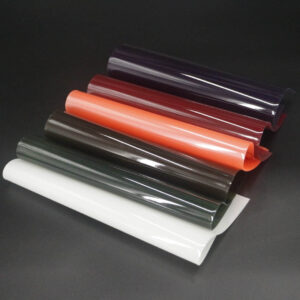 Since the waterproof and permeable TPU absorbs water in the air very quickly, the drying of raw materials needs to be carried out using a dehumidifying dryer, the dew point is set at -40 ℃ ~ -30 ℃, the drying temperature is adjusted between 90 to 110 degrees for baking, generally need to be dried for 4 to 6 hours, moisture control below 300 ppm before production can be produced.

2. Mixing and requirements of raw materials

Waterproof and moisture-permeable TPU elastomer needs to be selected and then mixed with masterbatch, lubricant, matte additives, antistatic additives, and other processing aids, according to the actual needs of different products, adjust the appropriate proportion to mix, weigh the raw materials, stir and mix evenly through the mixer, add to the dehumidifying dryer for drying.

Some manufacturers also use machinery and equipment with multiple automatic weighing devices to dry and weigh various drying additives separately, then add them to the mixer of the extruder and feed them into the extruder through the screw of the extruder.

Because the waterproof and permeable film produced is very thin, the thickness of the film on the market is mostly between 0.01mm and 0.025mm, so the crystal point or glue point in the raw material should be within a controllable range, otherwise, in the produced film, there will be uneven dots, which leads to a series of problems such as broken film or low water pressure test of the film when compounding with the fabric later.

In addition, the TPU material itself has high processing viscosity, relatively poor film-forming property, narrow processing temperature range, and high requirements for the stability of the melting index of raw materials.

There are many ways to process waterproof and moisture-permeable films, which should be selected according to actual needs.

The coating method usually dissolves raw materials with solvents such as DMF, EAC, TOL, MEK, etc., individually or mixed, and then coated by knife coating or roller coating. 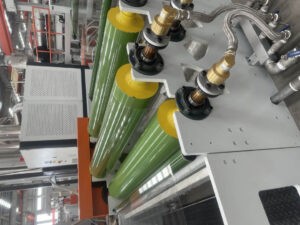 The coating method is mainly to control the viscosity of the product after dissolution, the pressure of the knife and the coating surface, the gram weight of the coating, the production speed, the setting of the oven temperature, etc. If it is not well controlled, it will cause various problems such as uneven coating thickness and bubbles in the coating.

GWELL:Efficient Asa Film Extrusion Line – The Best Of Both Worlds

China GWELL Tells You That Paper Is Really Made Of Stone

What is Stone Paper Machine used for?