From display devices such as TVs to electronic products such as tablets and mobile phones, more and more industries have an increasing demand for optical films. PC/PMMA composite sheet, an optical film, can achieve excellent glass-like effect through advanced surface treatment technology. This material is gradually being used in the mobile phone back cover market. Having more perfect optical quality and higher flatness is a major guarantee for the glass-like effect of the composite sheet, and it is the basis for this material to go longer and farther on the road of mobile phone back cover.

For professional film manufacturers, it is hoped that the composite films and sheets produced by them can achieve such a level as possible: perfect optical transparency with small thickness error and high flatness as much as possible. But the vast majority of extrusion equipment and their calenders encounter problems when producing films with thicknesses less than 500 μm.

However, the more important and daunting challenges lie behind: as the film is squeezed excessively between the calendering rolls, stress is generated and remains in the film, and the stress is gradually released during the subsequent processing process and the inevitable shrinkage of the film occurs At the same time, it will also produce a very obvious phenomenon of birefringence (birefringence refers to the phenomenon that one incident ray produces two refracted rays). Such films are unlikely to be used in any optical applications, especially mobile phone covers, which are currently hot.

A single production line can produce single-layer and composite co-extruded, double-sided polished, frosted and surface microstructured films with optical properties. Gwell film extrusion lines are particularly suitable for thin film products in the thickness range down to 50 μm and with extremely high tolerances.

The flatness of the film is important, especially for display applications. The third roll of the Gwell calender can be oscillated around the center roll. With this special design, the cooling forming contact between the film and the calender roll can be easily adjusted. In the extrusion production state, the position of the third roll of the calender relative to the center roll can be adjusted relatively accurately so that the upper and lower sides of the film and the roll surface are in the same cooling and forming contact to avoid warpage of the finished product, and thus have better smoothness. Spend.

The process operating mode allows precise and automatic adjustment of the roll gap by changing the extrusion speed (in pressure control mode).

How to avoid the residual tension of the film

The pressure control mode allows to set a small and constant gap pressure in the calender roll gap, because too high roll gap pressure will create too much tension inside the film, which will seriously affect the film quality and the subsequent film processing Such as the impact of the thermoforming process. 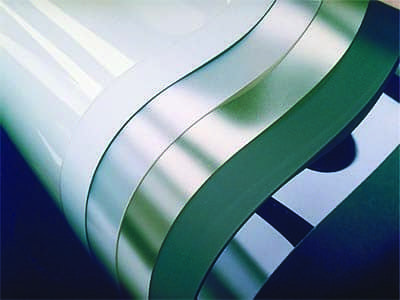 Gwell is well aware of the importance of the market and has been working here for nearly 30 years. Its customized equipment + localized services will create the best optical composite film and sheet extrusion solutions.

Why GWELL’s EVA/POE film extrusion Line is more popular? Are there any advanced technologies?